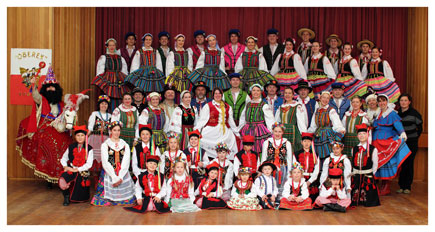 Rehearsals have commenced for all 2 groups of Oberek:

We warmly invite anyone interested in taking part in Polish dancing to come along and join in!

A little bit of history 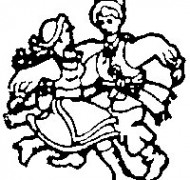 For almost two years the ensemble performed at many functions organised by the Polish community and also at the request of other interested organisations. Performances gradually dwindled and finally ceased because of marital commitments and members moving interstate.
Six years later Mr Bohdan Burbo conceived the idea of forming a new dance ensemble. Including the choir, the group consisted of sixty members with Mr Burbo as director, dance instructor and choreographer and Mr Michal Stankiewicz as musical director. Apart from performances for the Polish community in Hobart, Launceston and in Hydro-Electric Commission camps, the ensemble also performed for the Australian community at schools, theatres and hospitals.

With numerous teachers, the group’s repertoire has grown richly. Supported by the Polish Community, dedicated parents and enthusiastic committees, the group has purchased new costumes and taken on further space in the Polish House to house its rich array of costumes. “Oberek” has travelled widely to other states and attended festivals, which has seen our dancers forge strong friendships with other dance groups from within the country as well as from Poland.

As we recently celebrated six decades of Polish Folk Dancing in Tasmania we look back in nostalgia and with gratitude for the effort and achievements of all those who contributed to the promotion and development of our Polish Folk Dance Ensemble in Tasmania. We also look to the future with hope and excitement at the continued awareness, appreciation and promulgation of our Polish cultural heritage and its contribution to the enrichment of Australia’s cultural life and identity.